A Discussion with a Nobel Laureate: Shirin Ebadi and the Struggle for Democracy in Iran, Part I 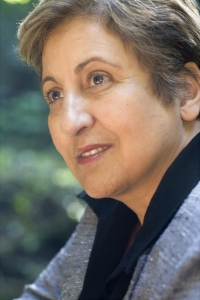 “A victory for women paves the way for democracy in Iran.” -Shirin Ebadi, October 9, 2009

Yesterday morning I had the unique opportunity to sit down with 2003 Nobel Peace Prize Laureate Dr. Shirin Ebadi, the prominent Iranian human rights lawyer and global activist for justice, democracy, and the rule of law. The first thing that struck me was that while Dr. Ebadi’s physical stature is diminutive, her presence is commanding.

Ebadi has spent her career defending victims of human and civil rights abuses and taking proactive measures on behalf of the children, women, and political prisoners in her home country of Iran. We met up in Boulder, Colorado, where she was the keynote speaker at a timely conference titled “Human Rights and Women’s Rights in Islam” sponsored by the Department of Peace Studies at Naropa University, a private, nonprofit, nonsectarian liberal arts institution dedicated to advancing Buddhist-inspired “contemplative” education.

An hour before I was scheduled to speak with her about the status of the Women’s Movement in Iran, the news broke that Barack Obama had been awarded the Nobel Peace Prize. I had to know what Dr. Ebadi – an individual known for boldness – thought about the selection. Ebadi said (via her Laureate Liaison Pantea Beigi of Peacejam):

I congratulate and welcome President Obama to the large family of Nobel Peace Laureates, and would like to say to him that this is a huge responsibility. I hope he’s able to realize that the word peace is not just the absence of war. It is a collection of circumstances that will eradicate children dying of hunger, a person imprisoned for writing an article, or a person tortured while in detention. It is through understanding all of this that the true meaning of the word peace can be implemented.

It was a gracious comment, but its significance was underscored by the obvious challenge it offered to President Obama and everyone who advocates on behalf of social justice. Merely speaking about peace (or disarmament or global community) itself is not enough – it must be acted upon. Deeds must match words, and for one to truly advance the causes of peace and human rights, they must be prepared to accept the inherent risks (in the president’s case, of alienating portions of his constituents on both the right and the left).

Ebadi understands risk. We spoke at length about her experiences defending members of the Iranian Women’s Movement against charges ranging from heresy to “threatening national security.” It is widely understood within Iran that virtually all of the charges against the defendants (mostly activists and journalists) are fabricated, but the hierarchical, male-dominated, theocratic legal structure makes it almost impossible for women charged with such crimes to speak up on their own behalf.

Ebadi and her colleagues have taken it upon themselves to help secure the human rights and dignities of these women while simultaneously protecting (or perhaps better put, correcting) Islamic values. She told me that part of her job is to help women interpret Islam “correctly” in order to assert their claim to equal rights. She and her colleagues have – on numerous occasions- presented mounds of documentation intended to force the courts to acknowledge that at a minimum, there are numerous possible interpretations of Islamic law, and ideally, to compel them to recognize that their own mandates are in violation of the spirit of Islam. It is a powerful strategy – reclaiming Islam – that has formed the basis for much of the unity and discipline behind the Women’s Movement in Iran and which has drawn in supporters from across all demographics, including sex, of Iranian society. Collectively, these efforts – alongside some very successful movement activities including the One Million Signatures Campaign – have chipped away at both the government’s moral authority and its political legitimacy. Under such circumstances, desperate regimes find themselves with only one remaining tool of control: repression.

But repression and violence are only effective when people fear them. As the events of the Green Revolution demonstrated last summer, the Iranian regime should no longer assume that the threat of violence will permit them to “restore normalcy” in a context where people have collectively withdrawn their consent for the ruling elite and where resistance goes on despite the threat of brutal repression. In fact, Ebadi asserts, each act of repression now serves as a recruitment tool for the movement. “I do not agree that repression can lead to the death of the movement,” says Ebadi, “For every woman arrested, ten more replace them.” Gene Sharp has written about this as the dynamic of political jiu jitsu: when a strategic movement is able to use a repressor’s own violence against them. “If the foundations

The challenge, of course, is to get those in Western media (as well as Western publics) to grasp this reality. The conflating of violence with strength and repression as victory creates an additional burden on a movement struggling to make its voice heard. But if Shirin Ebadi is any indication, the Iranian Women’s Movement is in extremely capable hands. It seems to me that the least we in the West can do is stop serving the interests of a brutal dictatorship by forcefully rejecting the conventional wisdom that violence equals control.