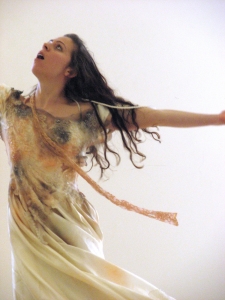 The larger-than-life mythological punch of cinematic effect is impressively leveraged to give Greek gods their due in Kevin Kuhlke’s insightful update of Jean-Paul Sartre’s adaptation of Euripides’ Trojan Women for Naropa University’s MFA Theater Program.

From the early moments, when images of the actors representing Athena and Poseidon—discussing their objectives vis-à-vis the Greeks and the Trojans—are conveyed from offstage video cameras and writ large on the walls of the theatre, we are on notice that there is nothing gratuitous in Kuhlke’s use of multimedia; rather, it implements the Hellenistic ideal of deus ex machina in a manner that would make the immortals jealous.

Kuhlke’s lyrics, Cynthia Hopkins’ original score, and Onye Ozuzu’s choreography give the plaintive cries and machinations of Hecuba (Meyung Kim) and the chorus an authentic primal feel. Kim’s gritty performance, highlighted by her gutsy vocals, ignites the tragic implications of the Trojan women’s plight. And yes, the comely Helen (Nita Mickley) not only cleverly wins a reprieve from Menelaus, but no doubt is responsible for launching a thousand ships.

Sartre’s version—largely faithful to the original, while including vague references to European imperialism in Asia—remains obviously pertinent at a time when the United States continues to wage two wars that have ripped apart the social fabric of the peoples it pretends to rescue.

Naropa University’s MFA Theater Program’s presentation of Jean-Paul Sartre’s adaptation of Trojan Women—Euripides’ classic tale of the Peloponnesian War between Sparta and Athens—opens February 20 at 8 p.m., then runs February 21 at 2 p.m. and 8 p.m., as well as February 22 at 2 p.m.

Trojan Women is performed at the ATLAS Center for Arts, Media, and Performance at the University of Colorado, Boulder. For more information about this performance, please visit: Naropa University Performance Series Calendar.