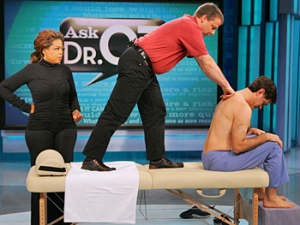 “Rolfing literally releases the joints,” Dr. Oz says. “When you talk to folks about the impact it has on them, a lot of them just stand taller. A lot is just freeing you up to live the way you’re supposed to live.”

Jonathan Martine says this therapeutic method works with the body instead of on it.

“What I’m looking at doing here is releasing the fascia, which is the wrapping around the muscles,” he says.